A buffet at Las Vegas used to be one of those things I looked forward to whenever we were in Vegas. It’s an institution like eating at In ‘n’ Out when people visit California (or Nevada). However, since I turned vegan eight years ago, the buffet has slipped from my mind, until I heard about the Wynn and its eponymous vegan founder.

Before our recent road trip to Las Vegas with family, the main thing I hoped to accomplish was to experience the buffet at the Wynn resort. Steve Wynn, the founder, is famously vegan and I’ve read that all restaurants in the Wynn/Encore enterprise have solid vegan options. I searched extensively on vegan options at The Buffet (very original name for the buffet!) and I was led to blogs that were at least 2 years old. I had no clue if it would be worth the: 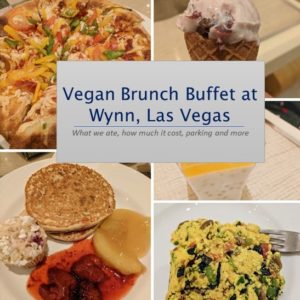 We eventually made it happen and it was a very positive experience overall! 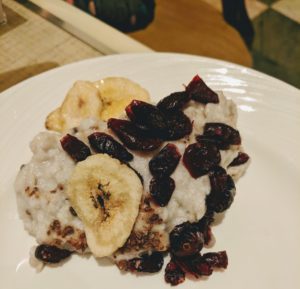 I looked forward to the mango tapioca pudding dessert throughout the meal, who would have thought a vegan buffet in a non vegan spread would actually have creamy pudding for dessert? 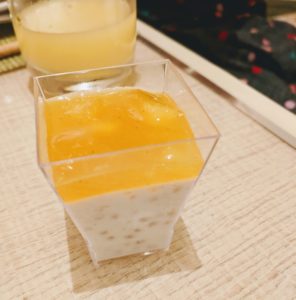 The dessert indulgence continued with the soy chocolate chip ice cream, not unlike the version at Trader Joes. 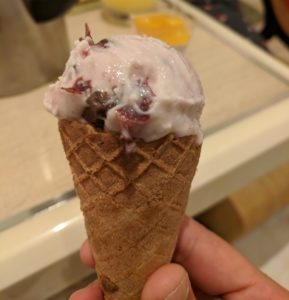 Lighting at the buffet was dim, so great phone pictures were out of the question. But I was ravenously hungry after the hour long wait and only cared about stuffing myself! An olive tapenade and an artichoke spread were consumed with gusto as they were bursting with flavor! 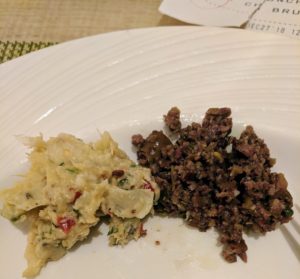 However, to me, the star of the day was the humble tofu scramble which despite having cooked this in my kitchen several times, I got this made to order not once, but twice.

We didn’t stay at the Wynn, so we parked at the Self park garage. Parking is not usually free, but hold on to your parking ticket to get it validated at the Buffet’s payment counter. We left our’s with my brother, who was checking out another restaurant at the Wynn, so a fetch-the-ticket dance ensued after our meal.

The Buffet had a one hour wait time (lines are really long!) – there are no pagers or tickets, both of which would have been better options. So bring fully charged phones, tablets, kindles, books, crayons and other forms of entertainment and adequately prep your kids ahead of time.  We paid ~$125 for 2 adults and a 4 year old kid, so young kids pay roughly 1/2 of the adults. We tipped in cash at the end of our meal, but you could tip when you pay first.

Once you get seated, you are introduced to your server who will clear plates and provide beverage service. At this point, I mentioned that I was vegan – they knew what to do and was introduced to a chef within minutes. The very knowledgeable chef walked the buffet offerings with me and spared no detail in pointing out all the vegan items. He also pointed deceptive looking dishes and told me specifically “not vegan”.

While the buffet is still predominantly meat, it still has several vegan options, something I wouldnt have expected during my last trip to Vegas around 2010.

Here’s a list of what I ate and I probably left something out.

I was particularly glad that vegans had something other than fruit for dessert. It would have been disappointing to spend all that much and not even have my sugar fix!

Overall, everything I ate was packed with flavor and service was pleasant and friendly. The dips and tofu scramble were especially memorable. The buffet didn’t have any items that I couldn’t personally make at home, so for that reason it is not something I would seek out specifically. But if I am part of a big group, I’d definitely suggest the Wynn so that there is plenty to eat.